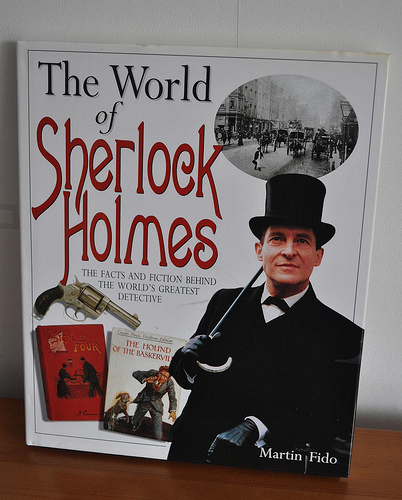 Most of us have experienced a case of book-hangover at some point in time or the other. Having finished a book and never wanting to leave its world is not uncommon. But what make those books so special are their characters. Characters who make us laugh, cry, furious, fall in love with or despise them wholeheartedly.  It is next to impossible to make a list of fictional characters that we love the most, but I have picked some of my favourites. Feel free to add or delete in your comments!

1. Sherlock Holmes – Sir Arthur Conan Doyle’s brilliance shines through in his creation of one of the best-loved detectives of all time. Holmes’ logical reasoning ability is matched by his nonchalance and chutzpah. Paired with Dr. Watson, he never fails to make Doyle’s stories come to life.

2. Rhett Butler – Margaret Mitchell’s ‘Gone With The Wind’ is set in the turbulent times of the American Civil War. The story of love and loss has several powerful characters, but Rhett and Scarlett take the breath out of you with their presence. Rhett Butler is the man every woman desires – sophisticated, witty, brave and gentle all at once.

3. Joe Gargery – Charles Dickens’s Great Expectations is a tale of guilt, betrayal, crime and love. Dickens’s characters are a blend of the real and the fantastic, and Joe Gargery is one of those characters that keep it real for the reader. He is kind, loving and humble, and always makes you feel like you know him.

4. Tintin – Belgian cartoonist Herge’s creation – Tintin – is adored by people of all ages who follow his adventures enthusiastically. Tintin has a very simple personality, and he’s honest and good-natured.

5. Emma – The protagonist of Jane Austen’s novel Emma is a favorite simply because she’s so real. She’s stubborn and vain, yet extremely lovable once you begin to identify with her mistakes.  Austen had predicted that nobody but her would love Emma’s character, but her readers have proved her wrong.

6. Atticus Finch – One of the most popular characters in American literature, this lawyer from Harper Lee’s ‘To Kill A Mockingbird’ is quiet, humble and polite instead of brash or macho. His simple personality and his integrity endear him to readers of all ages.

7. Jay Gatsby – Synonymous with ‘the good life’ and all things high-society, F. Scott Fitzgerald’s protagonist of ‘The Great Gatsby’ is something of a cult figure. Though having a dubious past and shady connections, he’s a ‘self-made’ successful businessman. But it is evident that he doesn’t naturally belong in the high-society world and that is what endears him to his readers.

8. Harry Potter – J.K. Rowling’s Harry Potter series took the world by storm because of the vivid characterisation and simple underlying stories with complex plots. The teen wizard Harry isn’t perfect, that’s what makes him special. He has his flaws and that endears him all the more to us.

9. Anne – An eleven-year-old girl who has won so many hearts, L.M. Montgomery’s Anne of Green Gables is a stubborn, loyal, intelligent orphan. The novel is a heartwarming and entertaining ride as Anne tries to adapt to her new life.

10. Jeeves – One of P.G. Wodehouse’s most popular creations, the witty, brilliant Jeeves is an all-time favorite. He is valet to Bertie Wooster, the endearing aristocrat with limited intellect, whom he repeatedly extricates from tricky situations.

It is never too late to be what you might have been.