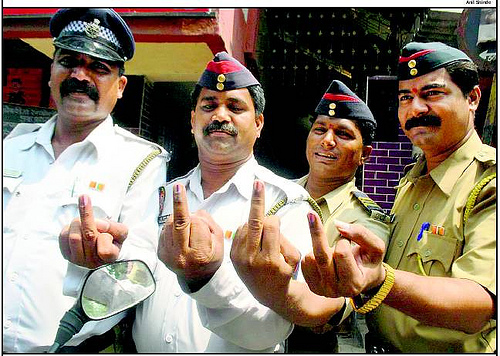 Election season is here and things are hotting up!  The general election will be held in nine phases, the longest election in India’s history, from 7 April to 12 May 2014 to constitute the 16th Lok Sabha. Voting will take place in all 543 parliamentary constituencies of India to elect Members of Parliament in the Lok Sabha.  The result of this election will be declared on 16 May 2014, before the 15th Lok Sabha completes its constitutional mandate on 31 May 2014.

According to the Election Commission of India, the electoral strength in 2014 is 81.45 crores, the largest in the world. There is an increase of 10 crores (100 million) newly eligible voters. This also will be the longest and the costliest general election in the history of the country with the Election Commission of India estimating that the election will cost the exchequer Rs 3,500 crores, excluding the expenses incurred for security and individual political parties. Parties are expected to spend 30,500 crores (about US$5 billion) in the election, according to the Centre for Media Studies. This is three times the amount spent in the previous election and is the world’s second highest after the US$7 billion spent on the 2012 U.S. election.

There is no reason why we should have a bit of fun as we approach the general elections; so I thought I would share a few funny ones with you!

* Tiwariji!” shouted an MP from the back, “What are you doing about the Abortion Bill?”
“Shhh, not so loud,” said Tiwariji, “I’m paying it tomorrow.”

* The Parliamentary Committee of the ruling party adjourned for dinner.
“Madam, what will you have?” inquired the waiter softly.
“I will have the mixed grill,” said the venerable lady.
“And what about the vegetables?” the waiter asked.
“They will have the same.”

* He walked into the local vegetable vendor’s shop in the small town and bought all the rotten tomatoes and fruit that were available.
The vendor said: “Oh! You are going to the visiting MP Sahib meeting today?”
“No”, he replied, “I AM the visiting MP.”

* Late one night a mugger wearing a mask jumped into a path of a well-dressed man and stuck a knife in his ribs. “Give me your money,” he demanded.  Indignant, the affluent man replied, “you can’t do this – I am a ruling party MP!” “In that case,” replied the mugger, “give me MY money.”

* Three contractors are bidding to fix a broken road on the highway.  They go with a state official to examine the road.  The first contractor works out some figures with a pencil. “Well,” he says, “I figure the job will run about Rs. 1 crore: Rs.50 lakhs for materials, Rs.30 lakhs for the labour and Rs.20 lakhs profit for me.”
The second contractor also does some figuring, and then says, “I can do this job for Rs.70 lakhs: Rs.30 lakhs for materials, Rs. 30 lakhs for labour and Rs. 10 lakhs profit for me.”
The third contractor nonchalantly leans over to the state official and whispers, “Rs.1.50 crores.”
The official, incredulous, says, “You didn’t even measure like the other guys! How did you come up with such a high figure?”
The contractor whispers back, “40 lakhs for me, Rs.40 lakhs for you, and we hire the second guy to fix the road.”

* A little boy wanted Rs.1, 000 so badly that he prayed for two weeks. But nothing happened so he decided to write a letter to God, asking for the money.  When the postal authorities received the letter addressed to “GOD”, they decided to send it to the Prime Minister.  The Prime Minister was so impressed, touched, and amused that he instructed his secretary to send the boy Rs.100. The little boy was delighted with the Rs.100 and sat down to write a thank you note to God, which read; “Dear God, Thank you very much for sending me the money. However, I noticed that for some reason you sent it through South Block and, as usual, those guys deducted Rs.900.”