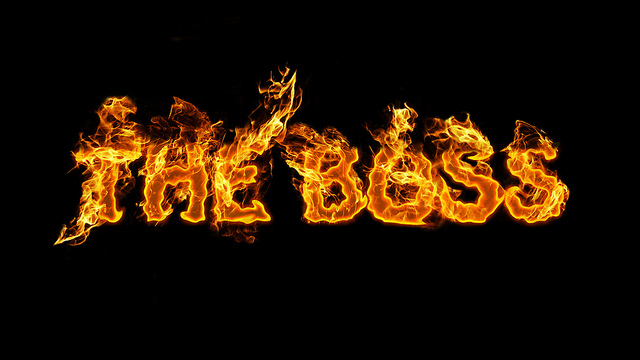 Bosses are always from hell. They probably come with sharp horns and razor-edged teeth to gnash you at work. But you can never wish away the boss, can you? The boss is a devil, but have you ever thought of the mistakes that you make while interacting with the boss. Are you also responsible for the mess between the boss and you? Are you always on the wrong foot? Are you at your stupidest best when interacting with the boss?

1. Forgot to Document:
“Are you done with the project?” The boss questioned curtly. “No. The deadline is a week away,” he responded politely. “It is today”. “No, a week later”. He and the boss argued endlessly over the deadline date. He knew he was right and the boss was wrong. But he had merrily trashed the email that mentioned the deadline. Yes, it was a week later. But there was no way he could save his skin. He knew not the rule of the game: document mails from the boss. They might prove handy when you are about to be roasted.

2. The perennial whiner:
He is the office’s perennial whiner. At every meeting with the boss, he whines, and whines and whines yet more. He thinks his colleagues are not cooperating, he thinks the project is too challenging to handle; he is saddled with more work than his project associates; he is never appreciated; he is the one who works late hours. The boss asks him to scan confidential documents, he whines; the boss tips him as the team leader, he whines; the boss proposes workshops, he whines…The boss hates the whiner. He wants the whiner struck off the roster.

3. Raised the caste/gender bogey:
He feels absolutely discriminated at work. He believes he was denied a promotion, not because of his shortcomings at work, but because of his caste, religious belief or alternate sexuality. On the other hand, she thinks she is being harassed at work, because the boss is a misogynist. She believes that her feminine gender works against her; she believes that she would never make it to the helm because she is woman.

These, certainly, are not unheard of discriminatory woes, but all this could be an assumption. Speak up. Ask the boss. Iron out things. If nothing works, move on. Your next boss might be a tad better and less discriminatory.

4. Spewed venom on networking site:
He thinks networking sites are his alter egos, his sounding board, his place to vent venom against all that is wrong at the workplace, specially the boss. Almost every evening he tweets about his awful boss; his networking agenda is to badmouth the boss. He hates the boss, but he forgets that Facebook and Twitter are not the fora to talk of all that ails his workplace. Venom against the boss on a networking site is a very bad idea – it might cost you this job. And dim your chances of another one. Remember, the world is a whispering gallery, everyone knows – and hates – the badmouther. Sure, no one wants to hire him either.

5. Approached the boss’ boss:
He thought his boss was straight from hell. He disliked his boss’ way of working, his anger, his sarcasm and his forever hands-off approach. Well, the truth is that he was stuck with a bad boss. But he never walked up to the boss to discuss the thorny issues; he never politely conveyed that he disagreed with the methods at work. Instead, he went straight to the boss’ boss and immediately launched a scathing attack on how bad his boss was. The step boomeranged; he should not have gone to the boss’ boss with a litany of complaints. He should have first tried creasing things out with the boss. If nothing improved, he could have taken up the issue with the HR.

6. The work shirker:
He not only shirks work, he is always ready with an alibi, justification. No, the boss does not expect him to stay back at work till 10 pm, but he surely wants the assigned job done. Not only done, but done well and within the stipulated time. As if this wasn’t enough of a flaw, he never lends a hand or volunteers to help his boss when other projects are racing against a deadline or heeding to the boss’ request to help a new employee with a difficult client. No one – specially the boss – loves the work shirker; he loves the one who takes initiatives and can multitask.

7. The one who is always late:
His watch is snazzy, his behaviour impeccable, his work stupendous. But there’s one flaw that the boss never pardons. He is forever late. The boss had fixed a meeting with the client at 9.30 am, but he merrily swaggers in at 10 am. No apologies for late arrival, no qualms about inconvenience to the boss and the client. Being late is probably the worst mistake at the workplace; it is your sure shot reason to get into the boss’ bad books.

8. Missed deadlines:
Just as he is forever late to work, he forever misses deadlines as well. He is tardy at work, spends too much chatting during working hours, steps out for a smoke too often, sleeps over project glitches. Deadlines are not sacrosanct for him. His favourite refrain: It will happen. When? It is always after the set deadline. He never informs the boss if there are   genuine reasons to push the deadline – communication about project schedules are not his habit. He knows not that deadlines are meant to be followed, not pushed perennially. He never keeps the boss in the schedule loop.

9. Lies, lies & more lies:
He lies through the skin of his teeth. Every time the boss questions him about the project progress, he cooks a story; every time the boss wants to know the numbers on the balance sheet, he concocts a figure. Initially, he got away with it, but when truth about his lies came to the fore, he lost the boss’ trust. He would soon lose his job, too. Between the boss and you, there’s no place for lies.

10. Forgot sorrys & Thank yous:
He has such an inflated ego that he never admits to his mistakes or says thank you for a good deed. He has forgotten the basic lessons he learnt in kindergarten: Politeness can help one go far in life. And then there’s his antithesis who says so many thank yous and sorrys to his boss that it reeks of sycophancy and speaks poorly about his self-esteem. Avoid too much or too little of polite thank yous and sorrys. Appreciate a good deed. Admit your mistake. The mantra: Keep it subtle.