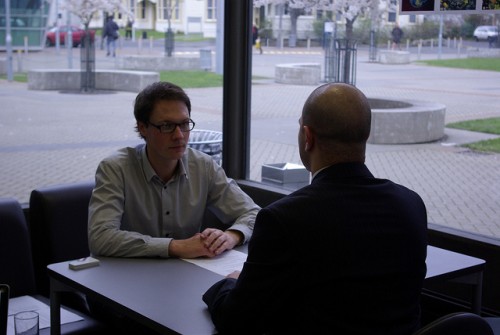 You’ve worked really hard on sprucing up your resume, you’ve written a beautiful cover letter that could convince anybody to hire you, and you’ve managed to land that interview that you want. From here, it should be a breeze, right?  Wrong.  So many of us either waltz into an interview with overconfidence or shuffle in more nervous than necessary and fall flat on our faces. Here are some of the most common interview faux pasthat many of us are guilty of:

1. “One second, is that the name of your product?” – Insufficient research about a company and its services shows that you’re not really interested or that you’re plain lazy. Yet many people show up at interviews with half-baked information and fumble through the interview.

Do your research, and this goes beyond a quick glance at the website. Understand the company’s vision and goals, which leaders are on the top management team and how they’re different from competition.

An actual incident for years ago – Hindustan Milkfood Manufacturers Limited (the manufacturers of Horlicks; now GlaxoSmithKline) had come to one of the IIMs for recruitment.  Only recently, the name of the company had been changed to HMM Limited.  Every single applicant – and, boy, these were IIM folks – wrote the earlier name in the campus’ application form rather than the new – and correct – HMM Limited.  The recruiters from HMM were so annoyed that they left the campus in a huff – and without even meeting any of the applicants!

2. Failing To Show Up On Time – If your interview is at 10 am, it does not mean 10:00 – 10:15 am. It isn’t a range in which you can show up when convenient. Being on time is the first impression we make and if that’s off, you can expect to have a negative score to start with. If you’re in a dire emergency, call your point of contact to inform him or her about your situation.

I recruit a lot of people; however, I always make it a point to reject those who don’t land up on time.  The only ones I consider are the ones who had the foresight to inform me or my team in advance.

3. Bad-mouthing a previous employer – By speaking ill of your previous employer, you’re only conveying that you might have a negative attitude. The person interviewing you will start to wonder if you will work well with his team or run at the first sign of a tough call. Besides, it’s just inappropriate to bad-mouth someone when you’re at a job interview. You’re much better off telling them that you’re looking for a more challenging role where your skills would be put to better use.

4. Not asking questions – In every interview, we’re asked, “So do you have any questions?” And most of us say “No” or ask a couple of clichéd questions (“Do you work on Saturdays?”) What you really should be asking them is about their vision, about what they aim to do in the next couple of years, if they are flexible with a role in terms of exposing you to other teams or products. By doing this, you can evaluate if it’s the right job for you, and save yourself and the firm trouble later.  More importantly, you will convey that you are really interested in the company that you are interviewing with.

Do make it a point to write down a few incisive questions beforehand about the company you are interviewing with.  A couple of good questions would impress your interviewers immeasurably.

5. Not Using Appropriate Body Language – The impression you make isn’t just about the content of your answers. Not making eye contact, fidgeting or crossing your arms are all a big no-no at interviews. A lot of us don’t pay attention to the finer details, like a firm handshake for starters. Keep your body language positive and confident.

6. Taking Calls or Responding to Texts – You’re at the interview because you want the job and not because you’re doing anyone a favour. So make sure you follow basic etiquette and turn off your cellphone before entering the interview room.

If you think that most people would take care of this elementary mistake, think again.  I have always been amazed by the number of people who walk in for interviews without switching off their cellphones.

7. Not making an effort to dress well – A lot of people spend time poring over literature and preparing for the interview but forget to prepare their outfit for the day in advance. What this leads to is a hastily put together, sometimes creased excuse of an outfit. Appearance does matter because it shows how professional you are. So make sure you take care to dress well.  It will also help if you visit the rest room before the interview to brush your hair, straighten your tie or re-tuck your shirt.

8. Talking too much, or hardly talking – We all tend to ramble when we get nervous or when we’re unprepared. But a little preparation goes a long way in ensuring that we don’t keep talking to just fill the silence. Answer to the point. On the other hand, nervousness causes some of us to just clam up. Tell yourself that you’re well prepared and that you’re just giving it your best shot.

9. Not Telling It Like It Is – An interview is a time to make a good impression. We don’t deny that. But that doesn’t mean you go to great lengths claiming to have done stuff you really haven’t. Many of us get so caught up trying to base our answers on cues from the interviewer that we don’t give a true picture of ourselves. Don’t embellish facts and talk clearly about your work experience and achievements.

10. Not following up – After the interview, most of us wait indefinitely for the hiring company to get back with an answer. It helps to send a “Thank You” email and create an opportunity to remind them that you’re a good fit for the role.

So the next time you are called for that interview, do keep the above points in mind.  You will find that getting that job was not such a nightmare as you had visualised.