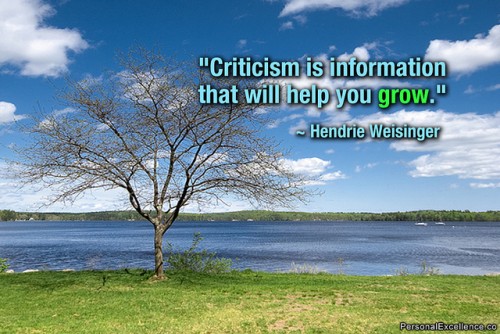 “Criticism may not be agreeable, but it is necessary. It fulfills the same function as pain in the human body. It calls for attention to an unhealthy state of things.” Winston Churchill.

Fight it as much as you will but you won’t be unable to escape it! It is no stalker or virus that I am talking about; rather, I am highlighting one aspect that is universally hated but will always be an integral part of our lives. Criticism! Criticism has always had a strong presence in our lives. Complaints from your boss soon take on the avatar of criticism when they flow in constantly. Even your spouse’s bickering may take on the garb of criticism. A normal human being faces criticism in truckloads, much more than appreciation.

So what should one so? Here is a guide to handling criticism so that it does not make you feel downhearted and depressed; on the other hand, the guide will help you take criticism in your stride. Read on; we need to avoid associating criticism with pessimism or negativity!

Is your critic worth it? Well, that is a very important question that you need to ask yourself. Often, we forget that a thin line exists between criticism and contempt. Genuine criticism can be an invaluable feedback provided that it has come from someone who is offering worthwhile criticism. So when someone criticises you next, find out if the critic is good enough to judge you or opine on you. Mostly, only someone wise and with experience should be judging your work and passing a critical comment. In case you find that the criticism is gratuitous, ignore the critic and his criticism straight away.

Take it on an extrinsic scale – The trick in handling criticism well is to never take it to heart. Value it and even respect the person offering the criticism. On no account should you take it so deep that it affects your equilibrium. Take criticism at its face value and treat it as a stepping stone to gauge your faults. Of course, this automatically means that you will need to introspect and change or tweak a few things about yourself. The one thing to remember here is that the more gravely you take any criticism heaped on you, the more pessimistic you will end up being. What you should do is to evaluate the criticism to see if it holds true. Then, instead of brooding over the criticism, spend time in erasing the weakness that was the basis of the criticism.

Evaluate and assess yourself – Whether you like it or not, criticism will be offered to you unsolicited! What you need to understand, however, is that criticism in no way a synonym for inability unless, of course, you are a serial offender.  Once some criticism trickles in, the sensible thing to do is to figure out if it is justified. If it is, there is a need to do some self-assessment. Possibly, there is some minor skill that you need to enhance. Perhaps you need to brush up your on-job abilities.

While there are various ways to assess yourself, one way to do it is to take out a couple of hours and honestlywrite down answers about yourself on the following parameters:

* Your interests: The activities and areas that genuinely interest you.
* Your lifestyle: How you spend your time and with whom; what your typical day looks like; what you do in your spare time? Have you picked up some bad habits over the years?
* Your values: What are the moral principles and the rules of conduct that drive you?  What are some of the negative traits that you have acquired over the years?
* Your personality: What are the positive aspects of your personality? What are the negative ones?
* Your skills: What are you good at? What practical skills do you already have? What skills could you and do you want to develop? Are you a good communicator? Do you have outstanding organisational skills? Are you a good team leader?

Once you have identified your strengths and your weaknesses, you can take some necessary corrective action to improve yourself, especially in areas where the criticisms are concentrated. Do remember that no one is perfect and you should never rate your inherent worthiness as a human being.

Understand the difference between gossip and criticism – In fact, you could even ask friends and family to frankly opine on the areas of your personality that need betterment. Accept criticism at home first. Only then will you learn to take it in professionally. Criticism always needs to be treated as advice. That is the best way to be happy and level-headed even when you hear a critical comment about yourself. Make sure that you understand the fine line between gossip or backbiting and criticism. Critics will never talk behind your back; a gossipmonger will. The best way to handle criticism comes when you understand if you are reacting to gossip or to criticism. Keep confidence in yourself and explore ideas that can add zing to your personality. Even if this takes some time, very bit of it will be helpful in the long run.

Hello, no one is perfect! This is no consolation but a mere fact. Develop the understanding that you may have your own negative traits but your positive qualities overpower the former. Develop such strengths that your weaknesses get ridden over. Better still, work on your weaknesses. But always remember that there is no ideal human being. Every person, including the ones that we revere, has his share of weaknesses. What has set apart the heroes of ours has been their ability to take criticism in their stride and to work on aspects that needed to be worked on.