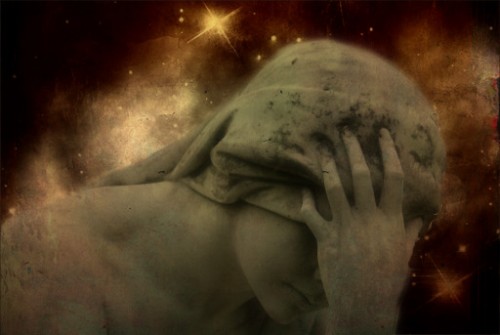 “Sometimes I just think depression’s one way of coping with the world. Like, some people get drunk, some people do drugs, and some people get depressed. Because there’s so much stuff out there that you have to do something to deal with it.” – Ned Vizzini, It’s Kind of a Funny Story

J.K. Rowling, the famous author who wrote the Harry Potter series, needs no introduction, but there was a time when she wasn’t famous at all and her life was pretty miserable. She had a difficult childhood, always scared of a disapproving father who could not be pleased by anything she did.

Her mother died a painful death, fighting with multiple sclerosis, when she was only 15. Till date, she regrets not seeing her mother’s body before the funeral. Her father did not approve of it and she had no choice but to agree.

The author was breaking inside but depression actually hit her when her first marriage to a television journalist failed after just two years. By then she was a mother of a baby girl who had just turned two. J.K. Rowling had lost all faith in herself and in the people around her. She was living in constant fear that something would go wrong and she would lose her only child.

She believed very strongly that nothing would ever go right in her life and she would never be happy again. She wasn’t exactly homeless but didn’t have money either and she had to survive. This was the phase when she decided to battle out by channelising all her negativities into writing. This is when she came up with Harry Potter, making him someone like her, a person with no family.

The dementors were the depressive moods she was trying to fight off and, if you remember, the dementors could only be fought by a happy memory in the form of Patronus. That was her way of coping with her depression and it sure did wonders for her!

J.K Rowling now is one of the richest authors in the world!

A friend was in a relationship with someone for the past eight years. The two grew up together and were childhood sweethearts, but what she wasn’t aware of was that her man had been cheating on her all these years.

Once she found out about her unfaithful boyfriend, she tried to commit suicide; luckily, she was saved but slipped into the grips of depression. The doctor treating her gifted her a diary one day and asked her to write since she refused to talk to anyone.

Weeks went by and there was not even a word on those pages but, slowly and steadily, she started filling its pages. Initially, there was a lot of self-blame, lack of confidence, inability to see that she was not at fault and that what had happened was not her mistake.

When she did start writing, the initial words were abusive, targeted at the cheating boyfriend and at those who had betrayed her by not exposing the guy at the opportune time. At last came the acceptance that what had happened had happened and that she couldn’t do much about it but be thankful that she still had time to start afresh. And she did just that.

She also started opening up to the people who were close to her. That was a major step, as the doctor said, in coping up with her depressions and fears. With all the encouragement she was receiving, she started encouraging herself too. She spoke to people of those times when she would feel the depression taking over, when she thought of him and the moments they had spent together, but now she was fighting them off by not being too hard on herself.

She would write down all the negative comments that would come to her mind, then write a positive one by its side and finally cross out the negative ones. She went back to exploring herself, her talents and took up new hobbies as she had a lot of free time on her hands.

Today she is an air hostess, travelling the world. She has worked on her body and is smart and beautiful. Most importantly, she is mentally strong. A few days back, she met her friends, talked about everything and had a nice time. Neither she nor her friends brought up the topic of her boyfriend; instead they only talked about her travels and her future.  The past was the past.

The girl is in love again and this time with someone nice, a pilot. She is soon to be married.

Though, in a real sense, it was writing down her feelings that helped the most, there were other factors too. Her brother gifted her a Golden Retriever as she had always wanted a pet. Loving it, tending to it and spending time with her dog were also a major contributor in helping her recover. Those terrible days are now long gone.

So what are the lessons from the two stories above? When we are travelling down the road of depression, it’s easy to lose ourselves. And depression is not always caused by a break-up; one can get depressed after a job loss, the loss of a dear one and even loneliness. Almost anything or any situation can lead us to sadness and, finally, depression. However, while it is perfectly normal to be sad at times, things become serious when your sadness starts harming you emotionally, mentally or physically. That is when you need to start working towards getting back on terra firma.

So here are some simple things to do:

1. Express – I know this is not as easy as it sounds but you need to do it. Force yourself if you have to and things will become relatively easier. Write, dance, sing, act, talk to someone close to you, but openly express your issues and your insecurities.

2. Believe in yourself – Once you have learnt the art of expression, start restoring your faith in yourself. One quality at a time.  Self-belief is, possibly, the most important trait that will get you back to normalcy.

3. Get a pet – Caring for someone other than yourself is a major healing mechanism and everyone needs the unconditional love which only a pet can give.

Of course, the points above are basic. If you find that your ailment is more serious than what you can cope with on your own, do take the help of your loved ones, finally opting for professional help. For some inexplicable reason, we Indians feel that depression is NOT a serious ailment; it is something that we should not be advertising amongst our family and friends. The result is that we let things fester when we should be taking quicker action.

“It had long since come to my attention that people of accomplishment rarely sat back and let things happen to them. They went out and happened to things.”