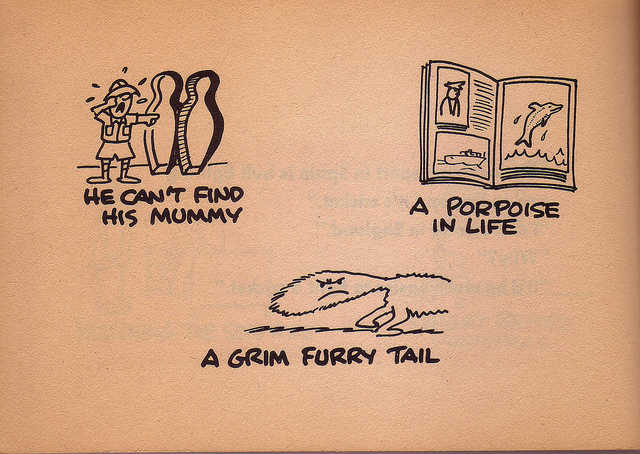 Paronomasia is a play on words. Or, simply put, a pun!  Puns are witty and humorous and add a lot to the cleverness of the person speaking or writing them.  English literature is replete with puns and even Shakespeare and Dickens used them often in their writings.

Here are some examples:

* What happened when the cow tried to jump over a barbed wire fence? Udder destruction.
* I used to be a transplant surgeon, but my heart just wasn’t in it.
* I fired my masseuse today. She just rubbed me the wrong way.
* I used to be a train driver but I got side-tracked.
* I used to be a tailor, but found the work to be just so-so.
* I used to be a hotel clerk, but then I had reservations.
* What did the toy store sign say? Don’t feed the animals. They are already stuffed.
* What musical is about a train conductor? “My Fare, Lady”.
* Old photographers never die, they just stop developing.
* Old cleaning people never die, they just kick the bucket.
* What would you get if you crossed a parrot with a centipede? A walkie-talkie.
* My first job was working in an orange juice factory, but I got canned because I couldn’t concentrate.
* Old sculptors never die, they just lose their marbles.
* “Champagne for my real friends and real pain for my sham friends.” (Credited to Tom Waits).
* Curl Up and Dye – Beauty salon in London.
* “Dishgusted, dishgusted, dishgusted.” (Ad for Lux dishwashing liquid).
* “Your children need your presence more than your presents.” (Jesse Jackson).
* “Peace is much more precious than a piece of land.” (Anwar al-Sadat, speech in Cairo on March 8, 1978).
* Why do we still have troops in Germany? To keep the Russians in Czech.
* A horse is a very stable animal.
* Time flies like an arrow. Fruit flies like a banana.
* An elephant’s opinion carries a lot of weight.
* What is the difference between a conductor and a teacher? The conductor minds the train and a teacher trains the mind.

“Life is what happens to you while you’re busy making other plans.”