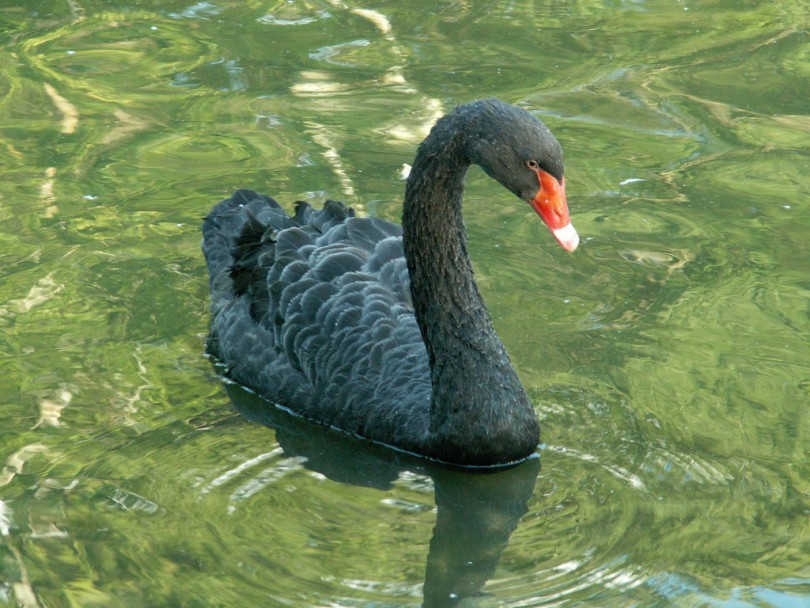 This isn’t a review of the Natalie Portman movie but the interesting theory propounded by Nassim Taleb in his book, The Black Swan.

According to Taleb, Black Swans are events that are rare game changers (they have an extreme impact) and can be explainedonly on hindsight.  Almost all major scientific discoveries, historical events and artistic accomplishments have been “black swans”.  The growth of the internet, the personal computer, World War I and the 9/11 attacks are some of the examples of “black swans”.

To reiterate in Taleb’s words, “What we call a Black Swan is an event with the following three attributes. First, it is an outlier, as it lies outside the realm of regular expectations, because nothing in the past can convincingly point to its possibility. Second, it carries an extreme impact. Third, in spite of its outlier status, human nature makes us concoct explanations for its occurrence after the fact, making it explainable and predictable.  A small number of Black Swans explains almost everything in our world, from the success of ideas and religions, to the dynamics of historical events, to elements of our own personal lives. The global meltdown of 2008 was totally unexpected – a Black Swan – and caught the entire financial world (and governments) unawares. The result was absolute mayhem – closures of a number of banks and financial institutions in the West. Many survived only due to massive support from their governments.

In the postblocked of the second edition of The Black Swan, Taleb outlines 10 principles for a Black-Swan-Robust society, originally published as an editorial in the Financial Times in 2009.

1. What is fragile should break early while it is still small. Nothing should ever become too big to fail. Evolution in economic life helps those with the maximum amount of hidden risks – and hence the most fragile – become the biggest.

2. No socialisation of losses and privatisation of gains. Whatever may need to be bailed out should be nationalised; whatever does not need a bail-out should be free, small and risk-bearing. We have managed to combine the worst of capitalism and socialism. In France in the 1980s, the socialists took over the banks. In the US in the 2000s, the banks took over the government. This is surreal.

3. People who were driving a school bus blindfolded (and crashed it) should never be given a new bus. The economics establishment (universities, regulators, central bankers, government officials, various organisations staffed with economists) lost its legitimacy with the failure of the system. It is irresponsible and foolish to put our trust in the ability of such experts to get us out of this mess. Instead, find the smart people whose hands are clean.

4. Do not let someone making an “incentive” bonus manage a nuclear plant – or your financial risks. Odds are he would cut every corner on safety to show “profits” while claiming to be “conservative”. Bonuses do not accommodate the hidden risks of blow-ups. It is the asymmetry of the bonus system that got us here. No incentives without disincentives: capitalism is about rewards and punishments, not just rewards.

5. Counter-balance complexity with simplicity. Complexity from globalisation and highly networked economic life needs to be countered by simplicity in financial products. The complex economy is already a form of leverage: the leverage of efficiency. Such systems survive thanks to slack and redundancy; adding debt produces wild and dangerous gyrations and leaves no room for error. Capitalism cannot avoid fads and bubbles: equity bubbles (as in 2000) have proved to be mild; debt bubbles are vicious.

6. Do not give children sticks of dynamite, even if they come with a warning. Complex derivatives need to be banned because nobody understands them and few are rational enough to know it. Citizens must be protected from themselves, from bankers selling them “hedging” products, and from gullible regulators who listen to economic theorists.

7. Only Ponzi schemes should depend on confidence. Governments should never need to “restore confidence”.Cascading rumours are a product of complex systems. Governments cannot stop the rumours. Simply, we need to be in a position to shrug off rumours, be robust in the face of them.

8. Do not give an addict more drugs if he has withdrawal pains. Using leverage to cure the problems of too much leverage is not homeopathy, it is denial. The debt crisis is not a temporary problem, it is a structural one. We need rehab.

9. Citizens should not depend on financial assets or fallible “expert” advice for their retirement. Economic life should be definancialised. We should learn not to use markets as storehouses of value: they do not harbour the certainties that normal citizens require. Citizens should experience anxiety about their own businesses (which they control), not their investments (which they do not control).

10. Make an omelette with the broken eggs. Finally, this crisis cannot be fixed with makeshift repairs, no more than a boat with a rotten hull can be fixed with ad-hoc patches. We need to rebuild the hull with new (stronger) materials; we will have to remake the system before it does so itself. Let us move voluntarily into Capitalism 2.0 by helping what needs to be broken break on its own, converting debt into equity, marginalising the economics and business school establishments, shutting down the “Nobel” in economics, banning leveraged buyouts, putting bankers where they belong, clawing back the bonuses of those who got us here, and teaching people to navigate a world with fewer certainties.

Then we will see an economic life closer to our biological environment: smaller companies, richer ecology, no leverage. A world in which entrepreneurs, not bankers, take the risks and companies are born and die every day without making the news.

In other words, a place more resistant to black swans.

Our job should not be to attempt to predict Black Swan Events but to build robustness against negative ones that occur and be able to exploit positive ones. Most of us, while looking for opportunities, only look at trends that have ALREADY emerged. Rarely do we spend time trying to figure out scenarios and solutions in case a negative Black Swan occurs; nor do we spend time thinking of what could be a positive Black Swan and how we can exploit it quicker than others.

Of course, it is difficult to identify positive Black Swans even after they have occurred because many of them gather momentum over time (the internet, for example). The question is: do we even spend ANY time thinking of such things?

“Your time is limited, so don’t waste it living someone else’s life. Don’t be trapped by dogma – which is living with the results of other people’s thinking. Don’t let the noise of others’ opinions drown out your own inner voice. And most important, have the courage to follow your heart and intuition. They somehow already know what you truly want to become. Everything else is secondary.”