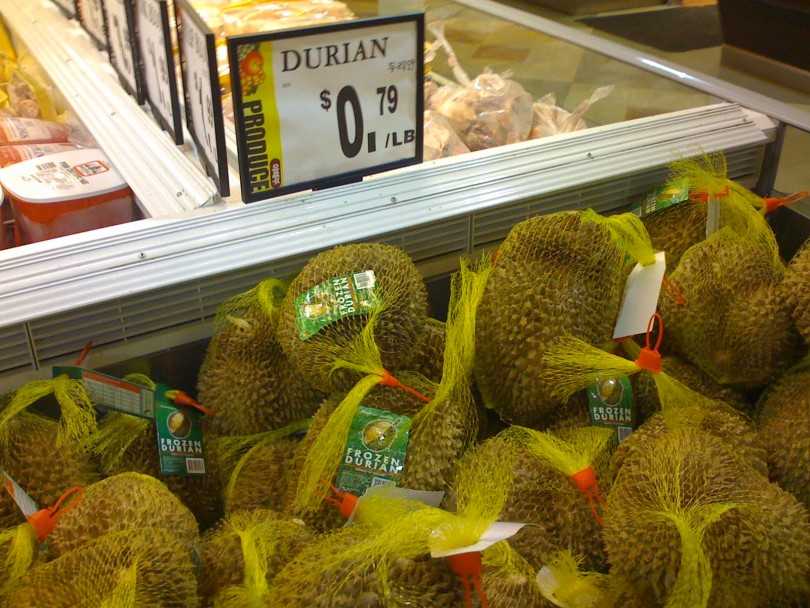 Many people say that the best part about travelling is the opportunity to experiment with new cuisines. Visit places in South East Asia and Europe, and experiment you will. Chicken feet, monkey brains and camel tendons may sound like animal body parts to you, but in some cultures, these are a delicacy. You may cringe at the sight of grasshoppers, rattlesnakes, rats and eels, but some people get close enough to put these in their mouth.

If you have a bold heart and an iron stomach, here are just a few interesting foods to try from around the world.

1.  Durian
There may seem nothing wrong with a pale yellow, fleshy fruit with a slightly spiky exterior, but that’s not what the Durian is known for. A South East Asian snack, the Durian may taste juicy, but it is the odour it gives out which has made it a prohibited fruit in many places across the world. Many describe its rotten smell as that of sewage, gym socks, body odour, rotting flesh and even garbage. However, it’s succulent on the inside.

2.  Fugu
The fugu is an extremely poisonous blowfish, which is actually a treat in Japan. Although it has a delicious flavour, it takes the lives of about 300 Japanese a year. The level of toxins in these fish is so high that only highly experienced and licensed chefs are permitted to cook it.

3.  Haggis
You’ll need much more than a bold heart to fathom this dish. Haggis is a made by combining sheep’s liver, heart and lungs with oatmeal and spices, and then wrapping up this mixture in a casing of sheep’s stomach.  This small lump is then boiled and relished by the Scottish, the original makers of this dish.

4.  Tea with Yak Butter
A common drink in Tibet and North India, this drink is a mixture of tea, yak butter and salt. This combination results in the creation of a purplish liquid with a thick consistency. It is a very rich drink and very high in calories. It is a common beverage in Tibetan and North Indian monasteries, where the monks gulp down several cups in a day.

5.  Marmite
Marmite, also known as vegemite, is a bread spread popular in Australia, New Zealand and UK. This thick, black spread is made from yeast extract and is said to have a salty, slightly pungent taste. The locals may not think much of it, but it certainly is an acquired taste.

6.  Akutaq
Akutaq or Eskimo ice-cream is an Alaskan dessert, first invented by the Eskimos during the frigid Alaskan winters. The main ingredient in these ice-creams is animal fat, which holds the ice-cream together and gives it a creamy, thick texture. The fat used is usually from reindeers, walruses, seals and moose, depending on their availability. There are several variations of Akutaq, some of which include the addition of fish, berries, salmon and caribou, and may or may not contain any sugar.