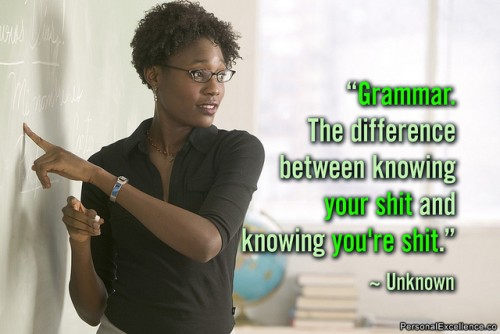 “Ladies, if you want to know the way to my heart… good spelling and good grammar, good punctuation, capitalize only where you are supposed to capitalize, it’s done.” John Mayer.

As a person who strongly believes that good writing is a powerful communication tool, I get extremely frustrated with my younger colleagues who don’t think twice about mutilating the English language.  I am certain that many of them smirk behind my back after I correct their indifferent grammar or spelling.  You may well be doing that right now!  You may well be asking “How the hell does grammar matter?” Well, actually, I think it does.

A few months ago, I read an article in Harvard Business Review written by Kyle Wiens, CEO of iFixit and founder of Dozuki.  The article was entitled ‘I Won’t Hire People Who Use Poor Grammar. Here’s Why.” In that article, Wiens presented a compelling case for good grammar and I am reproducing large chunks from it:

“Everyone who applies for a position at either of my companies, iFixit or Dozuki, takes a mandatory grammar test. Extenuating circumstances aside (dyslexia, English language learners, etc.), if job hopefuls can’t distinguish between “to” and “too,” their applications go into the bin…But grammar is relevant for all companies. Yes, language is constantly changing, but that doesn’t make grammar unimportant. Good grammar is credibility, especially on the internet. In blog posts, on Facebook statuses, in e-mails, and on company websites, your words are all you have. They are a projection of you in your physical absence. And, for better or worse, people judge you if you can’t tell the difference between their, there, and they’re…On the face of it, my zero tolerance approach to grammar errors might seem a little unfair. After all, grammar has nothing to do with job performance, or creativity, or intelligence, right?

Wrong. If it takes someone more than 20 years to notice how to properly use “it’s,” then that’s not a learning curve I’m comfortable with. So, even in this hyper-competitive market, I will pass on a great programmer who cannot write.

Grammar signifies more than just a person’s ability to remember high school English. I’ve found that people who make fewer mistakes on a grammar test also make fewer mistakes when they are doing something completely unrelated to writing — like stocking shelves or labeling parts.

In the same vein, programmers who pay attention to how they construct written language also tend to pay a lot more attention to how they code. You see, at its core, code is prose. Great programmers are more than just code monkeys; according to Stanford programming legend Donald Knuth they are “essayists who work with traditional aesthetic and literary forms.” The point: programming should be easily understood by real human beings — not just computers.

I hire people who care about those details. Applicants who don’t think writing is important are likely to think lots of other (important) things also aren’t important. And I guarantee that even if other companies aren’t issuing grammar tests, they pay attention to sloppy mistakes on résumés.  After all, sloppy is as sloppy does.

That’s why I grammar test people who walk in the door looking for a job. Grammar is my litmus test. All applicants say they’re detail-oriented; I just make my employees prove it.”

If Wiens’ words don’t force you to go hunting for your dirt-covered high school grammar books, nothing will! If truth be told, most people have allowed their grammar to slide abysmally. Many of us are so used to typing on our mobile phones that good grammar has been sacrificed at the altar of convenience. It is true that communication is meant to be effective and that if a “ull” gets the job done as well as “you all”, what’s the big deal! However, there is the important matter of the degradation of a language to such unacceptable levels that people do not even know the difference between the two.

This is not a grammar lesson but the following points will serve to illustrate the deterioration of the English language and its usage:

* Your and you’re: Two of the most commonly misused words, they are often interchanged to deliver results ranging from the hilarious to the frustrating. When somebody refers to something that belongs to you, they would use the word “Your.” Instead, if they used the word “you’re,” the end result is usually not only incorrect but highly confusing. “I like you’re book” essentially means that I like that you are a book! Unless you were speaking to your latest novel, you have written incorrectly.
* Irregardless: This gem is used so frequently that even professors have no problem inflicting it on their hapless students.
* They’re, their and there: Seemingly similar, these three terms are certainly not the same and neither are they interchangeable. Yet they are, to hilarious effect!
* Affect versus Effect: Other non-interchangeable words that frequently make regular folk seem less intelligent than most fifth graders.

Interchanging words is just the proverbial tip of the iceberg. There are other grammatical errors that need to be mentioned to illustrate how poor our usage of grammar has become. For example:

The Double Negative
Perpetrated by the entertainment industry, this is one of the worst forms of mutilation of the English language. Sample this: “I don’t want nothing from you.” The idea is to stress how badly the speaker doesn’t want anythingfrom someone, and yet it is being done at the expense of sacrificing the rationale and logic!  Not wanting nothing is tantamount to wanting something!

The Subject Verb Agreement
Very often, we come across sentences where, because there may be references to more than one person, the singular or plural is misplaced. For example: “The boy with the spotted cats have a ball.” The subject is the boy in this sentence; thus the correct verb would be “has.” However, since the word ‘cats’ (which is plural) precedes the verb, it has been typed or spoken as “have”. This is a simple mistake, really, but the number of times we hear people make these mistakes is enough to make one cringe.

The Misplaced Modifier
This is one of my pet peeves.  The error here is to place phrases and punctuation in such a manner that the meaning of the sentence changes drastically. For example, “Smelling like rotting eggs, my sister took the trash out.” I have only one thing to say to this – ask the stinking sibling to take a bath.

You did good
This phrase deserves a place all by itself. It has become so commonplace that it doesn’t even sound wrong to native speakers of the English language. ‘Good’ is an adjective when we should be using a verb. ‘You did well’ is the right usage.

Start to Finish
Most folks start their sentences these days without using the capital! It is even acceptable to start a sentence with “because” “and” and other such conjunctive words. They render the overall meaning quite confusing! “Because stars shine at night” is not a complete sentence; in fact, the lack of a prelude to the “because” is pretty infuriating.  There is also the problem of the unfinished sentence – a string of words sans a period or full stop that just flows into the next sentence. For example, “John and Mary got married on Monday The priest said they looked beautiful.” This is how sad the situation has become.

Using the apostrophe to make a word plural
This is another sad example of the acceptance of bad grammar. Signs at supermarkets and elsewhere display boards such as “Tomato’s” or “Blouse’s.” Such misrepresentations are appalling but are becoming increasingly commonplace.

Spelling
Some would consider this an out of place point to make in this article; yet what I am referring to is not the misspelling of words but to the strange contraction and subtraction of words for the sake of convenience. It is one thing to use the “sms lingo” for actual text messaging but when that style creeps into official or even semi-formal communication, it just feels wrong. The usage of “ur”, “thru” and the ever popular “wat” is becoming increasingly popular even in inter-office memos!

Grammar is flexible enough to adapt to changes; what was right in Victorian England may be totally out of place in the 21st century world. However, if the poor usage of grammar and words leads to a degradation of a language, we need to sit up and take notice. It is essential that we protect our languages – and not just English – with passion and fervour.  Sadly, in this fast paced world, grammar and words are being violated with impunity.

“To keep the body in good health is a duty… otherwise we shall not be able to keep our mind strong and clear.”